Fingerprint Friday was started by Beki, at The Rusted Chain. It was inspired by the song by Steven Curtis Chapman that contains the line…”when I look at you, I can see the fingerprints of God.” To participate and/or visit all of the blogs that do, go to the Fingerprint Friday Post on Beki’s blog and follow the instructions.


I had this great post all written about territorial wars between the birds on our property.
It was great.
It really was.
“What happened to it?” you might ask.
I have no idea. None. Zip.
One of those computer thingies that just happens sometimes.
I was editing it on my laptop and I apparently hit a wrong key and it all disappeared.
All of it.
I almost cried.
But that wouldn’t bring my post back.
So instead, I’m posting this rather sparse post of  a few, not really very good photos. 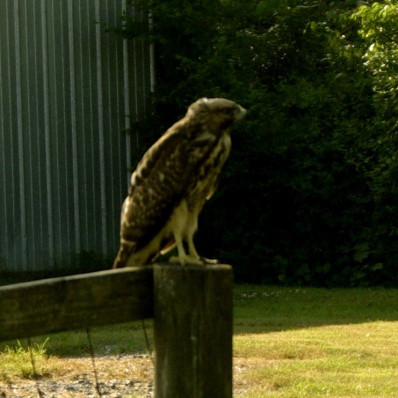 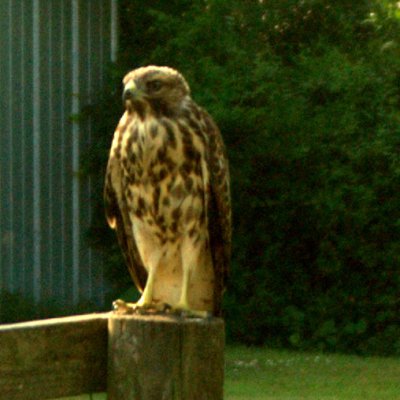 This is one of two immature red shouldered hawks who have been having territorial wars in our back yard.
Their parents were here last week.
One day I got to see one of the parent hawks bring food for this hawk.
The piece that I lost described in great detail all of the many battles that have occurred during the Bird Wars of NW Georgia.
But it’s gone.
Disappeared into the nether regions of this computer.
Never to be seen again.
It is much too late in the day to try to rewrite the whole thing.
In fact, at the moment I am a bit tired of the whole subject.
I’m going to leave this stinkin’ computer before I pitch it out the window.
I’m going outside to listen to my hawks screech at each other as the battle for territory continues.
If you want to know what is sounds like, go here.
I have an earlier rough draft.
I might try to rewrite it another day.

So, anyway this is my fingerprint of God.
Perhaps He thought I should keep it simple.
So simply put, Immature Red Shouldered Hawks and their parents are my fingerprint this week.
They are really cool birds.
I’ll tell you all it about it one day.
Maybe.
But it won’t be written on this laptop.

Update: I just wanted to follow up and say that God is awesome and His fingerprints really don’t need anything added to them…certainly not my story about the shenanigans of our fine feathered friends.  I’m glad my story went kaput and disappeared into cyber space. I like it simple. So please, just pretend I planned it this way! Have a great weekend. XO

Between Naps on the Porch
Jeanne Oliver

Musings of a creative life.